This event has passed

This event has passed 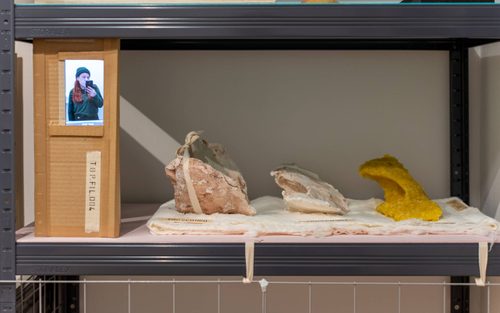 Claye Bowler’s work explores the archive – the body as an archive, hoarding as archiving, and looking at the political priorities of history.

He is interested in how queer and trans narratives specifically have been perpetually hidden, erased or destroyed.

In this film, he talks about what inspired him to create the exhibition Top, and why he presented his work as an archive.

Claye Bowler (b.1995) is part of a generation of artists to emerge in Yorkshire over recent years who continue the important history of sculpture in this county. He follows a tradition of making that began in the 1960s, especially in the UK and the USA, in which artists use their own bodies as both a subject and a material. Approaching everything with a sculptor’s mindset, he makes objects, works on paper, video and performance – all of which are represented in this exhibition.

Top 2022 contains work made since 2016 and is conceived as a single installation. It reveals Bowler’s own history, a trans history, that while autobiographical has much in common with the experiences of trans people globally. The installation comprises work created during the process of obtaining top surgery (an operation to remove chest or breast tissue) within the UK healthcare system. The procedure took six years, from Bowler’s first visit to a GP to his recovery after surgery revisions earlier this year.

Documenting this process, the objects and materials on display reflect an experience of dysphoria – a state of unease or dissatisfaction with life, often relating to the body. Through his sculpture, Bowler reveals his own experience of dysphoria, the emotions trans people can feel and some of his own coping mechanisms; before and during surgery, Bowler made casts of the body he wanted to have and see. He uses his work to show how many of the issues experienced by trans and cisgender* people are the same, but are dealt with in different ways.

Bowler presents his work on shelving racks and inside archival cabinets that are typically found in museum stores, hidden from public view. The lack of visibility for trans people and their histories, including in institutions, underpins much of Bowler’s enquiry. It is a call for change: without intervention these are histories that can easily be destroyed, lost or forgotten.

*Cisgender or cis: describes someone who identifies with the sex and gender they were assigned at birth.

Please be aware that this exhibition explores themes of dysphoria, surgery and has some works made using blood. It also contains graphic surgical imagery and human tissue which are hidden from open view and need to be physically accessed. These are marked with red tape and labelled.

Claye Bowler (he/him) recently moved to London from West Yorkshire. His work explores the archive – the body as an archive, hoarding as archiving, and the political priorities of history. He is interested in how queer and trans narratives have been perpetually hidden, erased or destroyed historically and currently. Bowler uses sculpture and performance to subvert these practices, whilst also creating space to showcase and support other queer and trans artists through founding and directing Yonder Gallery 2019-22 and Yorkshire Trans Choir 2018-22.

Bowler was Young Curator for Huddersfield Contemporary Music Festival hcmf// 2019-22, commissioned artist for Yorkshire Sculpture International 2021 and exhibiting artist for UK New Artists (UKNA) Leicester City Takeover 2022. His work was recently included as part of the group exhibition On Queer Ground at the Yorkshire Sculpture Park (2022) and he has an upcoming residency with Jerwood Arts and Newlyn Art Gallery & The Exchange (2023). He is currently Assistant Registrar – ARTIST ROOMS – Tate & National Galleries of Scotland, London & Edinburgh.

Top is his first solo exhibition. This exhibition follows the realisation of Bowler’s Measured Transition 2016-21, co-commissioned by the Henry Moore Institute and Yorkshire Sculpture International. The performance and video were the culmination of a five-year durational performance around the subject of top surgery within the UK public health system.

Claye Bowler: ‘I want to put trans people on the map in sculpture’

The first out trans artist to have a solo show at Leeds’s Henry Moore Institute talks about the way his casts represent his own experience of gender-confirmation surgery.

Read the full interview on The Guardian

Experience, study and enjoy sculpture from around the world in the centre of Leeds.

Plan your visit to the Henry Moore Institute